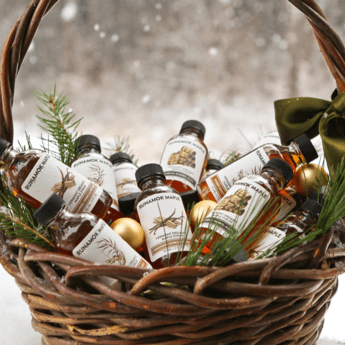 Find something for everyone on your list. These 60ml glass bottles provide a taste of our infused and barrel-aged syrups. The perfect stocking stuffer with our signature Vermont organic syrups. Each set contains 12-60ml bottles total.

Preheat oven to 350. Put oats in a bowl, add boiling water and let sit for about 10 minutes.

In a medium-sized bowl cream the butter and sugar together. Add the egg, maple syrup and vanilla. Slowly incorporate the dry ingredients until blended then add the softened oats. Pour into the prepared pan and cook until a fork tester comes out clean and the top is a little brown.

While the cake is baking, make the pecan topping by combining the maple syrup and butter together in a small pan. When fully melted and combined, add the coconut, pecans and sour cream. When the cake comes out of the oven, spread the mixture over the top and let cool.